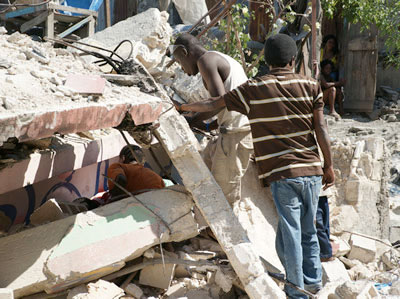 Haitians working to retrieve some of their worldly posessions a few days after the 2010 earthquake that killed over 220,000 people. Photo credit: Roger Bilham.

A proposed network of GPS stations in the pan-Caribbean region will aid the monitoring, understanding, and prediction of earthquakes, hurricanes, flooding, volcanoes, and landslides.

Over eighty million people live in Central America and in the Caribbean Islands, with many people living in the zones of maximum earthquake activity. The warm water and air temperatures of the Carribbean region also produce hurricanes and related heavy rains and landslides which create tremendous problems. 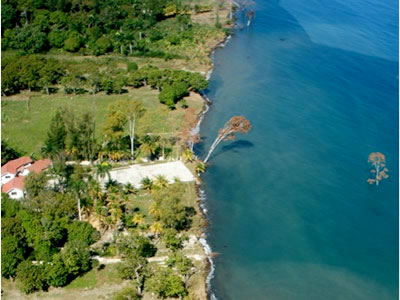 Trees off the coast of Haiti drowned when 10 - 30 m of land and 10 m of beach were submerged along 1 km of coastline. Photo credit, Roger Bilham. Roger Bilham. 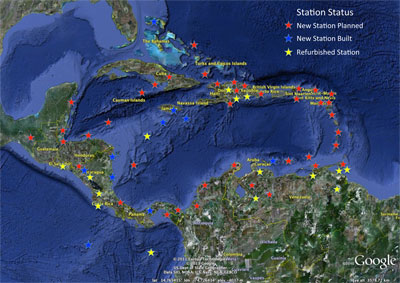 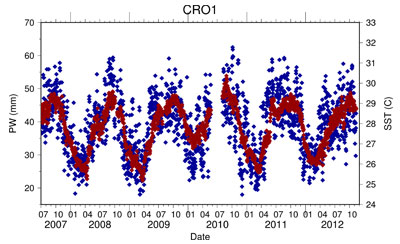 Time series of GPS derived amtmospheric moisture (or precipitable water, PW, in blue) and sea surface temperatures (or SST, in red) from St. Croix. The strong coupling of SST and PW is evident. 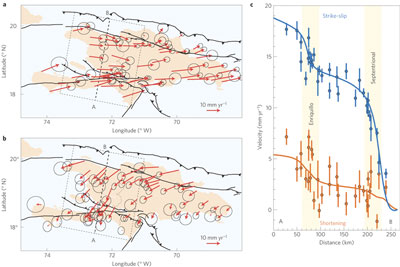 The GPS velocity field is determined from GPS campaigns before the January 12, 2010, earthquake. The ellipses and error bars show 95% confidence levels. (a) Velocities with respect to the North American plate. (b) [more]Velocities with respect to the Caribbean plate. (c) Velocity profile perpendicular to the plate boundary (coloured circles and one-sigma error bars) and best-fit elastic block model (solid lines). Blue = profile-perpendicular (‘strike-slip’) velocity components; orange = profile-parallel (‘shortening’) velocity components. The profile trace and width are indicated by dashed lines in a and b. Figure from Calais et al. 2010. Transpressional rupture of an unmapped fault during the 2010 Haiti earthquake. Nature Geosciences. 3, 794-799. https://doi.org/10.1038/ngeo992. 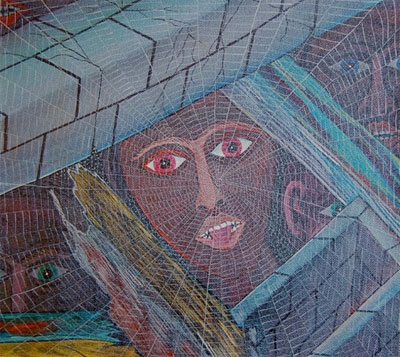 A painting by prolific Haitian painter Frantz Sephirin shows a family trapped under the rubble. To emphasize their predicament, he shows that a spider has already spun a web across the opening. From the BBC.

Understanding the factors that control these hazards requires getting more real-time data along earthquake zones and data from the atmosphere over the Caribbean Ocean. COCONet, the Continuously Operating Caribbean GPS Observational Network, will help to do this.

What are the questions scientists ask to better understand and predict earthquakes & tsunamis?

Which questions do they ask to better understand tropical storms and hurricanes?

What Will the COCONet Project Do?

This project will add 50 high-precision permanent GPS stations to 50 existing ones in Caribbean and Caribbean-border nations. These instruments are able to detect millimeter changes in movement of the Earth's crust. Locations are shown to the left. Increasing the density of GPS stations measuring plate motion will help geodesists model questions like those above more accurately.

Although scientists often use UNAVCO's GPS systems to measure tectonic movements in earthquake zones, they can also use the GPS radio frequency signals to estimate how much moisture is available in the atmosphere. See the figure on the left showing how GPS moisture data correlates well with sea surface temperature over time.

The aim is to create a pan-Caribbean refernce network, while coordinating and educating regional researchers, governments and agencies, and station operators.

The 2010 Haiti earthquake is the latest and most dramatic example of the impact of poor risk identification (earthquakes neglected in risk analysis), poor mitigation and prevention (no seismic building code), and lack of response capacity (no contingency plans). Situations like this then require vigorous international aid and assistance during and after the event.

Reducing the human and economic losses to natural hazards in the Caribbean and Central America will be aided by COCONet through:

This project will contribute to the education of numerous graduate and undergraduate students in solid Earth, atmospheric, and geodesy fields by providing high-quality GPS data to the Caribbean research science community. Support in the project is included for a RESESS intern through UNAVCO, a SOARS protege through UCAR, and a graduate student at Purdue University.

The National Science Foundation (NSF) has charged UNAVCO and the University Corporation for Atmospheric Research (UCAR) with developing this network with the help of the scientists in the region.

"COCONet has the potential to transform our understanding of seismic and hurricane hazards in the extremely vulnerable Caribbean region, and to support basic research into plate tectonic processes and regional climate change."
- Robert Detrick, director of NSF's Division of Earth Sciences.

"This is a very exciting opportunity for interdisciplinary science, and will provide a regional framework for new discoveries about the fundamental processes that control tectonic and atmospheric unrest."
- Meghan Miller, President of UNAVCO

"By establishing a single unified GPS network spanning the entire region, and by providing freely available, high-quality geodetic and meteorological data to researchers in both the U.S. and the Caribbean region, COCONet will be a major step in advancing Earth science research in this area."
- Russ Kelz, program director in NSF's Earth Sciences Division.

"COCONet has the potential to decrease vulnerability to hurricanes and earthquakes throughout the Caribbean while linking the civil, scientific, governmental and private sectors, integratng research and education, and promoting a culture of sharing data and information."
- Raj Pandya, Deputy Director of Education and Outreach, UCAR