The NSF-funded COCONet project provided support for Dataworks development and for three Regional Data Centers (RDCs), selected via a competitive proposal process. The RDCs provide new or expanded capabilities within the region. A focus on regional data sharing is a benefit of the COCONet RDCs. View data through any of the three COCONet Regional Data Centers:

View in the UNAVCO Data Archive Interface v2 »
DAI v2 quick guided tour »
Note that you can access short video guided tours of the DAI by clicking the Help link and accessing the Documentation tab.

Measurements of precipitable water vapor (PWV) in the atmosphere through GPS sounding is distributed through SuomiNet. 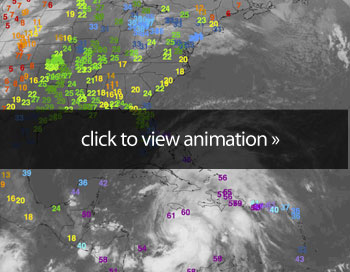 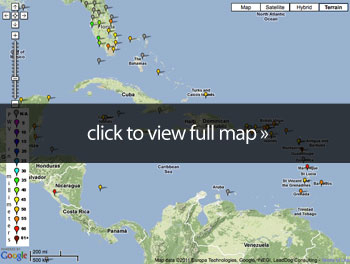 Question: What are the physical mechanisms for the coupling between sea surface temperatures and atmospheric water vapor, and is this coupling confined to the atmospheric boundary layer or does it extend into the free troposphere?

Continuous and accurate estimates of PW can be used to evaluate the sensitivity of PW to changes in SST. In a study of multiple global PW data products, Trenberth et al. (2005) investigated the coupling between SST, PW and rainfall, not only establishing the importance of PW to the global hydrological cycle, but also emphasizing that because water vapor is the most abundant green house gas in the atmosphere, it is an important observation for climate.
Trends in PW were observed to be increasing more consistently over oceans than land, but changes in PW related to ENSO variations were either of the same order, or slightly larger than the secular trends. Figure 3 shows a time series of GPS PW and Reynolds SST around the island of St. Croix (Reynolds et al, 2007). A regression of the two time series shows that approximately 70% of the PW variability can be explained by the local ocean surface, with the remaining variability attributable to advection of moisture through the atmosphere. COCONet will provide total column water vapor in both clear and cloudy conditions that can be used to measure air-sea coupling strength in a number of different ways. The distribution of stations across the Caribbean basin should provide an indirect way to measure water vapor fluxes along the boundaries of the region as easterly winds transport air parcels across the Lesser Antilles Islands, over the Caribbean Sea, and into either Central and South America or up through the Gulf of Mexico and eventually into the Great Plains of the United States. The latitudinal distribution of stations will test the strength of air-sea coupling through the Inter-Tropical Convergence Zone (ITCZ) and measure seasonal changes in this coupling as ocean SSTs evolve throughout the year. These data will be useful when evaluating atmosphere-ocean interactions in climate models, reanalysis products, and satellite observations (Mears et al., 2007; Mirsa, et al., 2009).

From the COCONet Proposal.

Question: What is the impact of continuous estimates of PW on hurricane intensity forecasts?

A number of environmental conditions are thought to strongly influence hurricanes, including vertical wind shear, aerosols, and most importantly warm sea surface temperatures. Hurricanes could not form without warm ocean surfaces. As one might suspect, the strongest link between the ocean and the atmosphere comes through the evaporation of moisture. A study of hurricane Bonnie (Braun, 2006) concluded that the ocean source of water vapor within the hurricane eye- wall accounted for only 4% of the total water vapor budget, with the remaining moisture coming from radial transport of moisture within the lowest 500 m of the boundary layer. The radial extent of this transport can be up to 2,000 km, implying that hurricane evolution and maintenance is a function of atmospheric conditions over a relatively large spatial scale. In conjunction with finer grid spacing in models, improved moisture analysis fields hold the potential for significant improvement in intensity forecasts as well as answering scientific questions associated with the hydrological cycle and interactions of water with atmospheric phenomena such as hurricanes.

The large aperture and continuous operation of COCONet will provide a water vapor product that will capture tropical storm systems in various phases of development (genesis, intensification, maturation, and weakening). These data will measure latent energy available to the atmosphere over various spatial scales and at high temporal resolution. Comparison with model analyses and forecast fields will provide diagnostic information for investigations researching hurricane genesis and intensification and will provide a baseline for improving forecasts that either underestimate or overestimate changes in storm strength. As an example, a statistical comparison of GPS PW to the Global Forecast System (GFS) analysis fields shows a significantly larger difference between the two over the Gulf of Mexico and Caribbean (larger than 3 mm rms with a bias of 1.6 mm) versus the broader continental United States (2 mm rms with almost no bias).

The UCAR GPS network in the Caribbean has been shown to positively improve hurricane intensity forecasts. Figure 4 shows GPS PW estimates overlaying a GOES-IR satellite image. These data were assimilated into the Weather Research and Forecasting (WRF) model at 12- km resolution and found to improve the minimum surface pressure of Hurricane Dean (2007) by approximately 20 hPa. Increased model resolution, as well as improved cloud microphysical and boundary layer schemes (Li and Pu, 2008), are also known to impact intensity forecasts, but the results from hurricane Dean are encouraging. It is likely that improvements in moisture observations will complement model improvements.

Similar research using satellite-derived PW fields have also shown the positive impact of PW in hurricane intensity forecasts (Chen et al., 2004; Chen et al., 2008). These studies highlight the relatively large uncertainties in satellite-derived PW estimates (5.5 and 3.3 mm rms for MODIS infrared and near infrared data products) and their degradation or complete failure in the presence of clouds or rain. GPS PW is insensitive to this liquid water, making it a complementary observation within hurricane systems. PW estimates will also allow for calibration of the microwave satellite systems that provide the bulk of the information on atmospheric water vapor over oceans. A network such as COCONet would create a basin-wide reference system to calibrate and validate satellite observations, reducing their errors and indirectly increasing the value of these satellite products for initializing weather prediction models.

Once COCONet is established and operational, it will produce data from multiple tropical storms each year, forming a collection of data both distant from and near to storm environments. Stations that are relatively far from the storms will be used to measure the strength of sinking air caused by outflow that suppresses humidity in the free troposphere. Stations that are within one or two hundred kilometers of the storm center will sample an atmosphere that is influenced by inflow and rain bands that not only cause significant precipitation, but also interact with the storm circulation through latent heat release in a convective environment. A few stations each year will also directly sample the deep convection along the eyewall as well as the eye itself.

From the COCONet Proposal.